Working It Wednesday Feb 17, 2016/Or Why I should Put Away Dyes When I'm Done With Them

This week has been full of dyeing because I have not one, but two shows in April.  DFW Fiber Fest which is April 1-3 at the Irving Convention Center and Yellow Rose Fiber festival which is April 15&16 in in Sequin, TX.  So I have a master list that I am tweaking and following for the most part.  BUT, I had a slight accident this morning with my dye pot.  I could blame it on poor lighting, or not enough coffee, but the blame really lies in the fact that I did not put away my brown dye last night, so when i reached for my black dye this morning, I ended up grabbing the brown.  And because I have moved all dyeing operations to the garage, I couldn't really see that it was brown either in powder or liquid form.  This can be solved by putting away my dye when I am done with each color way.  Lesson Learned!

I haven't been very good about wearing any kind of mask when I dye, so my goals are to never dye without a mask again.  I just get impatient and want to get on with it, so don't take the 10 seconds it takes to get my mask on. 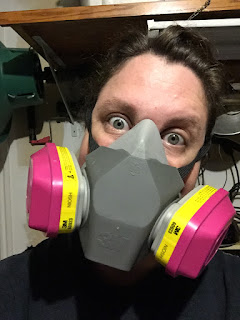 And this is a close up of the knitting I am finishing this week.  It is a Test Knit for Shannon Sanchez designs.  I told her I wanted to show off my halfie skeins and she told me she was looking for test knitters for a new pattern.  So its a win/win for the both of us. 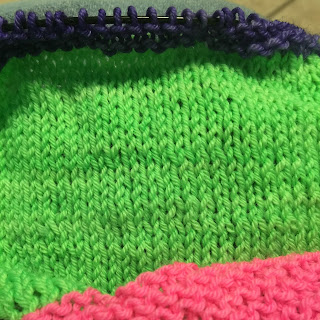 And here's a peak at one of the lovelies out of the depot this week.  Best Engineer In The 'Verse is debuting as a self striping at DFW Fiber Fest. 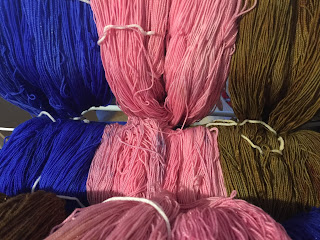