One Of These Things is Just Like The Other One....

One of the things that I purchased with my earnings from DFW Fiber Fest 2013 was this cool skein winder from Wooden Spinner on etsy.  It is well made and even has a row counter built into it.  And it wasn't too hard on the pocket book.  It was a bit of a squeak from use right now, but a little oil and I think that'll clear right up.  This tool has made skeining mini skeins for the Phat Fiber sampler go much quicker/easier and skeining my handspun go super fast.  I love this tool-it has saved my shoulders form the work of using a niddy noddy to skein. 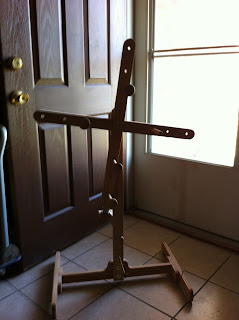 And, another thing I love about it is that it take mere minutes to turn this skein, which admittedly, is lovely.... 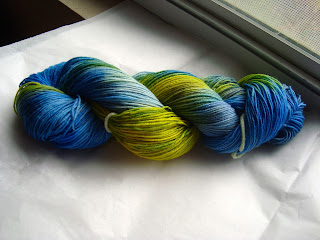 Into this skein which I think is gorgeous. 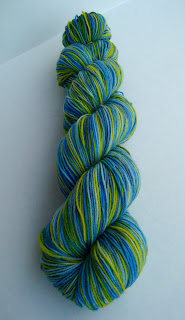 These are both the same color way, one is what it looks like out of the dye pot, the other is reskeined into a 2 yard skein. 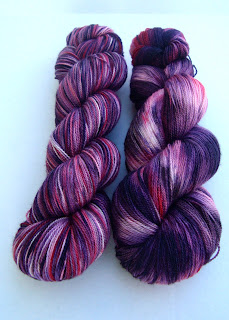 I am not gonna do this with every skein, but I think that more of my skeins may end up being reskeined.
Posted by Unknown at 9:14 AM 1 comment:

This skein of yarn timed out in my etsy shop with out being sold, so I decided to try some things with dye that I am normally a little to timid to attempt.  This was only twisted and dyed with my basic red dye, so you see everything from true red to pink in the skein.  I called it 'My Heart Bleeds for You'. 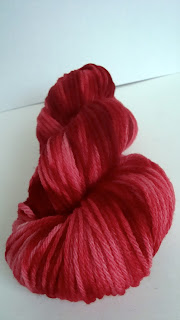 So, first I thought that I could add yellow and make an orange skein.  Not so much.  I also just took the dry skein, which I usually give everything a nice long soak, and threw it into my prepared dye pot.  My pot was all heated, acided, and the dye was already in when I chucked in the dry skein.  I did not get what I thought would happen.  So, then, when my dyepot was clear, meaning that the dye was all soaked up, I squeezed out the extra water, and threw more acid and some orange in the dyepot.  Huh.  That didn't really do what I expected either.  So, then I squeezed out the water again, threw more acid and hot pink in the dyepot.  I let the dye exhaust, and really, I did not get what I thought I would when I started the experiment.  But, I do think that I achieved my goal of having a deeply layered and colored skein.  As you can see, the reds are all 'hotter' than they were in the original color way.  Also, no pink.  There are some moments of a hot orange, but it is a deep and vibrant red orange.  So, mission accomplished. 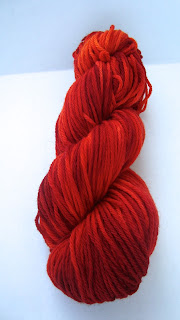 I was looking at it last night and held it up-'Look babe-It's like the fires of Mordor!' to which he replied-'Huh.  I think it looks like Kool-Aid.'

Why I love the Internet 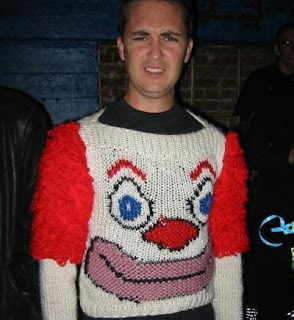 Wil Wheaton in a Bozo The Clown Sweater.  Enough Said.
Posted by Unknown at 8:30 AM 2 comments: 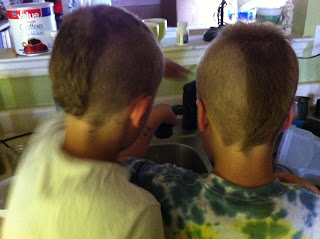 One of my jobs as a parent, aside from making sure my children are fed and clean, is to instill confidence.  It is one of the many reasons why I homeschool.  I was mercilessly picked on by my school mates growing up.  My mom would tell me how pretty and smart I was(while telling me I had chubby knees, but that's a subject for another day) and then I would go to school and be told by my peers that I was fat, ugly, and stupid.

So, who did I believe?  My Mom?  Who was contractually obligated to tell me that I was pretty and smart?  Or the kids that I saw more hours a day than my mother, that told me I was ugly and stupid?  Well, I believed the kids, don't ya know.

My kids do get interactions with other kids via our homeschool social group, and any outside extracurricular activities.  My job, as a mom, is to keep an eye on things.  Make sure that my kids have an appropriate response to bullying (yes, all kids bully, it's not just a public school thing), and guide them through without getting all up in the middle of it.  I want my kids to work things out and make decisions without my interference.

Getting Around To It

Today, I have started listing the rest of the yarn that I have left from my DFW Fiber Fest dyeing frenzy.  I will be listing new things daily.  i have found that listing one item a day does help to keep the traffic up in the shop over listing 10 things in one day.  I have also started sewing bags again for the shop.  I spent a day cutting and so have enough ready to sew that I should be good for the the next few weeks.

Today, I am planning on converting a couple of pairs of pants with blown out knees into shorts for O and continuing the work of getting everything put back into it's proper place after our flooring adventure.  Are we done?  No, we still have 3 transitions and most of the baseboards to do, but if we tackle one room a weekend, we should be good to go.

Next on the major house list is the boyo's bathroom.  This room is REAL small, ya'll.  It is roughly the size of a handicap stall in a public restroom.  My goal in this room is to replace the cabinet sink with a pedestal sink, replace the flooring, put up shelves, and paint.  I have the flooring, sink, and paint, we just need the sink hardware and plumbing.  I will put updates on here-I want to get this done by September 1, so it'll be my summer project.

I am really proud of this custom dye job that I did last week.  T wanted 3 skeins to do a Color Affection shawl that matched some shoes.  I love this grey that I ended up with.  I used a copious amount of silver grey and a touch of jet black to get this color.  I am gonna try for this color again.  It is so pleasing to me.  The blue I named 'True Blue', the grey 'Dark and Stormy', and the yellow 'Sunshine On My Shoulder'. 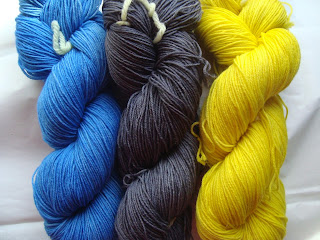 My Women Of Power small anything goes bag was feature in a zine last week at petitepurls.com and my Pam yarn was featured in a new podcast at allinonepodcast.blogspot.com.

Well, this was a rambly blog post.  I hope you guys are having a good Monday!
Posted by Unknown at 9:16 AM No comments:

The theme for the Phat Fiber Sampler Box for June is 'Villains'.  So, I had some fun with this one.  I thought and thought and picked the brains of other people before I committed dye to yarn.

I find the Cybermen character on Doctor Who to be particularly creepy.  Nothing, save the Doctor, can keep a human from being upgraded-or turned into a non-feeling almost invincible robot person for you non geeks out there.  It just gives me the creepies when there's a Cyberman involved.  So what better than to have a color way dedicated to them?  Human Point Two is grays on a 70% SW Merino/25% Nylon/5% Stellina base and has 438 yd per 100 g Skein. 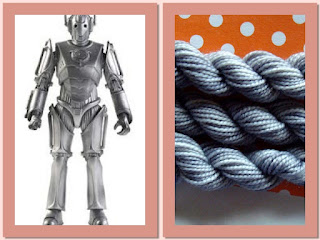 The other character I was inspired by was Gollum from Lord of the Rings.  Gollum is the nasty alter ego of Smeagol, a river folk that accidentally found a ring with unimaginable power.  The power of the ring warps all that is good in a person and makes them into a nasty nasty.  Tricksy is blue, gray, and yellow on 4 ply 75% SW BFL/25% Nylon Sock.  It has 464 yd to a 100 g skein. 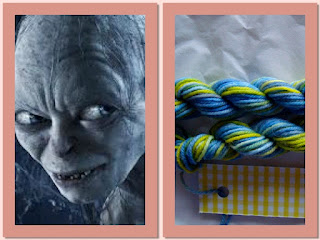 And last, but definitely not least, is the color way that is inspired by Irene Adler of the Sherlock Holmes universe.  Is she a bad girl that wants to be good?  Or a good girl that wants to be bad?  It just depends on the day!  I love this character and her duplicity gives the character a very human quality.
Adlerpated has crimson, pink, purple, and dark blue and is on a silky lace yarn that is 80% Merino/20% Silk.  It has 875 yd to 100 g.  This is my first time working with this base and it feels like a dream.  I imagine it will knit up with a fantastic drape and sheen. 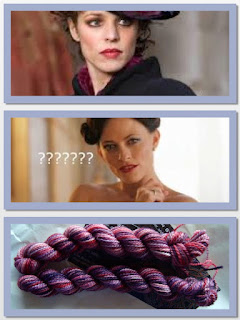 So, that is one thing I've been working on.  Breaking these into samples for the box, labeling them, and packaging them takes a good amount of work and time.  I have run a bit late in getting my samples to them the past couple of months.  My goal is to have next months samples out by the last friday of this month.  First, I need an Under The Sea inspiration.  So, here's to days of google fu-ing.
Posted by Unknown at 4:25 PM 2 comments: